Did Jesus Claim to Be God? 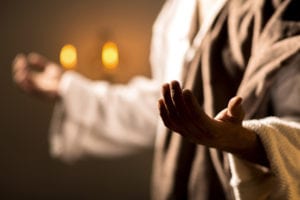 Did Jesus Claim to be God?

Throughout the world, there are opposing beliefs about the identity of Jesus.  The Christian perspective is that Jesus is God.  If you are a Christian and share your faith, this is a question you will have to answer.  Where did Jesus claim to be God? Apologists from different faiths acknowledge that Jesus existed, but make other declarations as to who He was. Some call Him a teacher, a prophet, a rabbi or simply an enlightened man, denying His divine nature. One of the most common rebuttals is “Jesus never said that He was God.” Opponents to Christ’s Deity often demand what Apologist David Wood calls “Exact word Criterion” by requesting that you produce a scripture where Jesus used this identical phrase, “I am God.  Worship Me.”  This is a tactic used widely in the Islamic community.  Of course, Jesus never made this exact statement, which makes it a convenient requirement for those who are trying to discredit the Christian faith. Nevertheless, scripture is clear on the fact that both Jesus claimed to be and displayed that He was, in fact, God. Our goal at Sound of Heaven Church is to equip you to always have an answer for the hope that is in you. (1 Peter 3:15) This article will give you the foundation to answer the question “Did Jesus Claim to be God?” based upon 2 criteria:

Evangelism Tip: Ask the person that you are talking to who they think Jesus was.  Understanding their perspective will help you know where to start.

Debunking the Demand for Exact Words

If someone demands you produce the instance where Jesus says an exact phrase like “I am God. Worship Me”, don’t get flustered.  The requirement is unreasonable.  I don’t have to make the specific statement “I am married” for it to be true.  I can talk about my upcoming anniversary, mention my wife in a conversation, wear a wedding ring and anyone can easily deduce my marital status. Apologist David Wood of Acts 17 Apologetics offers a great approach to this.  Hold them to their own standard.  Say,

“I’d be more than happy to provide proof that Jesus said this as soon as you present to me where He said “I am just a prophet (or whatever they claim Jesus to be)…. Don’t worship me.”

Their argument will collapse on itself by the very criteria that they are demanding of you. If you are talking to one of our friends in the Muslim community, take it a step further. Ask them, where did Jesus ever say “I am the Virgin-born son of Mary.”  He never said that.  The Quran agrees with the Christian declaration that Jesus was born of a Virgin so if exact statements are what they require, the claims in their own book are then subject to the same scrutiny. Once you have removed the ridiculous demand for a single exact statement, you can now have a conversation that is more reasonable.  The following is proof using scripture, in proper context, that Jesus did claim to be God.

Proof Jesus Did Claim to Be God Using Audience Relevance

One of the ways that we can come to the conclusion of whether Jesus did claim to be God is to observe the way those around Him, received Him.  Audience relevance is a key factor in understanding the proper context in Scripture.  We can look to both His followers and opponents for this context.  They were there with Jesus, and their reactions to Him tell us a lot about how they understood His intentions.  Both sides took radical measures in their reaction to Jesus’ claims.

Jesus’ Followers Knew Who He Claimed to Be.

Did Jesus claim to be God?  His followers certainly thought so.  Let’s start with those closest to Jesus.  His Disciples and the Apostles of the 1st Century Church had no doubt that Jesus was making the claim to be God.  They believed in Him, declared Him as Lord, and taught other people to do the same.  Here are a few examples:

Then he said to Thomas, “Put your finger here; see my hands. Reach out your hand and put it into my side. Stop doubting and believe. Thomas said to him, “My Lord and my God!”

To those who through the righteousness of our God and Savior Jesus Christ have received a faith as precious as ours:  Grace and peace be yours in abundance through the knowledge of God and of Jesus our Lord.

It teaches us to say “No” to ungodliness and worldly passions, and to live self-controlled, upright and godly lives in this present age,  while we wait for the blessed hope—the appearing of the glory of our great God and Savior, Jesus Christ, who gave himself for us to redeem us from all wickedness and to purifyfor himself a people that are his very own, eager to do what is good.

The Apostles were persecuted and martyred for their beliefs.  They never questioned, “did Jesus claim to be God?”  They paid the ultimate price and never recanted.

Jesus’ Opponents Were Outraged by His Claims.

On the other hand, those who sought to stop Jesus from spreading the Good News of a brand new covenant absolutely understood what He was implying.  The Pharisees and religious leaders were outraged.  Why?  Because Jesus was not just presenting Himself as a Rabbi, He operated with someone who assumed Divine authority.  It was for this reason that they crucified Him and then continued to persecute anyone who continued to follow the Savior.

For this reason they tried all the more to kill him; not only was he breaking the Sabbath, but he was even calling God his own Father, making himself equal with God.  John 5:18 We are not stoning you for any good work,” they replied, “but for blasphemy, because you, a mere man, claim to be God.” John 10:33

Proof of His Divinity through Jesus’ Life and Ministry.

Jesus left no room for confusion as to His place in the Kingdom of Heaven.  His words and actions were in such that only God Himself could take the liberties that He did.  Here are some more examples of the unmistakable divinity of Jesus.

The woman said, “I know that Messiah” (called Christ) “is coming. When he comes, he will explain everything to us.” Then Jesus declared, “I, the one speaking to you—I am He.”

The Prophet Isaiah declared centuries earlier that the Messiah would be God.

For to us a child is born, to us a son is given, and the government will be on his shoulders. And he will be called Wonderful Counselor, Mighty God, Everlasting Father, Prince of Peace.

The first-century Jewish leaders knew the implications of claiming He was the Messiah.

My sheep listen to my voice; I know them, and they follow me. I give them eternal life, and they shall never perish; no one will snatch them out of my hand.

Who can give eternal life but God?  In both Judaism and Islam, no one except the Creator can make such a statement.

When Jesus saw their faith, he said to the paralyzed man, “Son, your sins are forgiven.” Now some teachers of the law were sitting there, thinking to themselves,  “Why does this fellow talk like that? He’s blaspheming! Who can forgive sins but God alone?”

God speaks to Israel through the Prophet Isaiah declaring a characteristic ONLY attributed to God.  That is being the First and the Last.

“This is what the LORD says— Israel’s King and Redeemer, the Lord Almighty: I am the first and I am the last; apart from me there is no God.  Isaiah 44:6

Note:  When LORD is capitalized in the Old Testament, it always refers to Yahweh, the Creator of the universe. When a Muslim asks you “Where did Jesus claim to be God?”, you can refer to Rev 1 and 22. Remind them that the Quran also only attributes this to the Almighty.  Would someone (Jesus), if he were just a prophet make such a claim? In the Quran, Surah 57:3 says this of “allah”. “He is the First and the Last, the Ascendant and the Intimate, and He is, of all things, Knowing.” In the book of Revelation, Jesus declares the same of Himself as the First and the Last.

When I saw him, I fell at his feet as though dead. Then he placed his right hand on me and said: “Do not be afraid. I am the First and the Last. I am the Living One; I was dead, and now look, I am alive for ever and ever! And I hold the keys of death and Hades. Rev 1:17-18 Look, I am coming soon! My reward is with me, and I will give to each person according to what they have done. I am the Alpha and the Omega, the First and the Last, the Beginning and the End. Rev 22 12-13

Christianity, Judaism, and Islam agree in many ways as to what can be claimed solely by God.  Jesus regularly took on these attributes for Himself.

In both the Bible and the Quran (Surah 57:1), glory is reserved for the Creator.  In the Old Testament, Isaiah prophecies that God is not willing to share His Glory with anyone.

However, Jesus speaks a prayer what would be utter blasphemy if He were a mere prophet or simply a teacher.  In John 17, He prays:

Now, Father, glorify Me together with Yourself, with the glory which I had with You before the world was. John 17:5

The religious leaders must have lost their mind when they heard this.  Hence, why they sought to kill Him.

Did Jesus claim to be God? Perhaps, there was no clearer indication than when He referred to Himself using the same term that Yahweh used when describing Himself to Moses.

Can you imagine the look on the faces of the Cheif Priests when Jesus boldly declared these words?

This ancient term was spoken by God to describe Himself.  It was the Name that the God chose to present Himself to His people.  By declaring that upon Himself, Jesus accomplishes 2 things.

The Israelites had their Savior right in front of them.  The fulfillment of Emanuel (God with us) was right before their very eyes and they missed it.  Similarly, many today know of Jesus but refuse to acknowledge Hime for Who He is and Who He claims to be.  Jesus was, is, and always will be… God. This article was written to equip you with the foundation to address the common objection that Jesus never said that he was God.  While there are many more examples, the information presented here applies the important context of audience relevance and presents instances from Jesus’ own ministry proves that He undeniably claimed to be God. Have you come across an objection to Christianity that is hard to overcome?  Contact us and we would love the opportunity to speak with you and, where possible, provide resources that will help you share your faith more effectively.

If you’re still not sure what your next step is, let us help you.
Contact Us