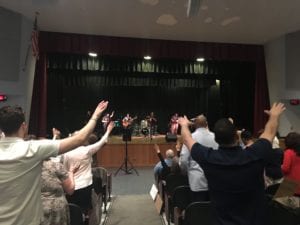 Another successful Long Island Awakening took place at Deer Park High School on April 13th, 2018.  We were glad to play a role in the planning of this event. Many from Long Island gathered to pray for our region.  Attendees included  local Christian leaders, prayer teams, congregation members and civic leaders.  Topics ranged from church unity to drug addiction to abortion and tackling the growing problem of child sex trafficking. Worship was powerful and led by Long Island’s own One Voice. Follow One Voice on Facebook As a special appearance, screenwriter Rich Romano discussed the role of Faith in show business. He premiered his upcoming movie “The Investigator”.  Here is he and brother Ray Romano, of Everybody Loves Raymond, discussing the movie.

Among other highlights was the presence of March for Life sharing on the upcoming protest in Albany and up and coming young star Jackie Romeo sang a breathtaking rendition of the Star Spangled Banner.

The event ended with an exciting announcement.  Long Island Awakening will be returning to Jones Beach this summer with an event at the bandshell.  In the Summer of 2017, we broke records for attendance at the start of an event with many spectators in the area and watching from the boardwalk.  This years event will take place on July 30th.  Don’t miss the opportunity to unite with fellow believers and praise God under the beautiful summer sky. For updates on Long Island Awakening events or to get involved, contact Pastor Bobby Riedel or follow LI Awakening on Facebook.

What is the Long Island Awakening? 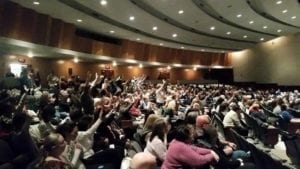 The Long Island Awakening started in 2015 as an event to unite the Long Island Church.  It includes Christians from all denominations and segments of society including religious, civic and civil leaders. Participants come together to honor God, worship and pray for the needs of Long Island.  The organizers, led by Pastor Bobby Riedel believe that when the Body of Christ comes together, we can change this region for the Kingdom of God.