The Gospel According to Rome 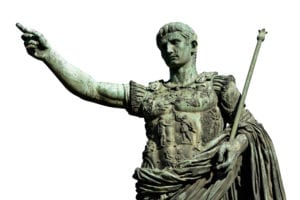 The Origin of the word Gospel

The origin of the word Gospel comes from the Greek word euaggelion. It means “good news” or “good tidings”.  In Christianity, when we hear the term Gospel only one thing comes to mind.  We attribute it to the miracle that God loved the world so much that He gave us His Son, our Savior Jesus.  Those that believe in Him enjoy eternal life with God, forever.  There is no better application, but that doesn’t mean that it was the first application. Around the time of Jesus’ birth the Romans were beginning to deify their emperors.  This wasn’t new to the world. Nebuchadnezzar demanded to be worshipped during the time of Daniel.  Xerxes claimed to be god as accounted for in the book of Esther.  If the Emperor is god, how can you defy him right? In a time of relative peace, Rome began declaring each new Caesar as a savior.  They celebrated the new regime by declaring their emperor as a “king of peace”.  Augustus actually declared his father god, which would make him the”son of a god”.  With every change of the guard, Rome proclaimed  “GOOD NEWS!  We have a new king.  A savior.  All your worries are over.” The word for good news was euaggelion. The following was found chiseled on the ruins of an old government building in Asia Minor, dated 6 BC:

Whereas the Providence which has regulated our whole existence . . . has brought our life to the climax of perfection in giving to us (the emperor) Augustus . . .who being sent to us and our descendents as Savior, has put an end to war and has set all things in order;  and (whereas,) having become (god) manifest /PHANEIS/, Caesar has fulfilled all the hopes of earlier times . . . the birthday of the god (Augustus) has been for the whole world the beginning of good news /euaggelion/ concerning him.’”

As oppressive as they were, Romans were actually VERY tolerant of other religions, but only under one condition.  Your god cannot be greater than Caesar.  For the early church to boldly proclaim the Gospel (euaggelion) of Jesus Christ, was a direct shot at Roman Imperial Authority. That didn’t stop them.  They had the the Gospel in the truest sense of the world… and so do we. There is a King that in the beginning was with God and was God.  Through Him all things were created. He is the One who ushers in peace, removes all sorrow and paves the way to victory.  There is no caesar that could make the claim of savior of the world.  That King is Jesus.  The Roman empire is no more, but 2000 years later the true Gospel, the Greatest news the world has ever heard is still very much alive. Here are all the scriptures that contain the word euaggelion